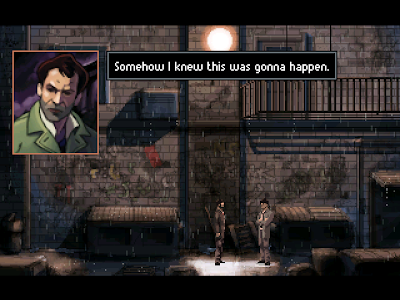 Wadjet Eye Games, an independent developer and publisher of retro-styled adventure games, is expanding onto the Android, Mac, and Linux platforms with Gemini Rue, the company's best-selling game to date.

The new versions are currently part of Humble Bundle: PC and Android 8: https://www.humblebundle.com/

Gemini Rue was widely praised when it originally released for PC, earning an IGF Student Showcase award, IGN's Editor's Choice award, Adventure Game of the Year from GameSpy and PC Gamer, and an 85% average review score on GameRankings.com. More recently, the iPhone / iPad version was praised as "a must-buy addition to your App collection" by Slide to Play, "an excellent port of an excellent adventure" by AppSpy, and "easily one of the best modern point-and-click adventures around" by PocketGamer, who also honored Gemini Rue with a Gold Award and selected it as Game of the Week.

The new Android version can be purchased outside of the Humble Bundle for $4.99 from Google Play (https://play.google.com/store/apps/details?id=com.wadjeteye.geminirue.google) and is coming soon to the Amazon Appstore. Currently exclusive to Humble Bundle: PC and Android 8, the Mac and Linux versions will later go on sale from Wadjet Eye's website and other online stores.